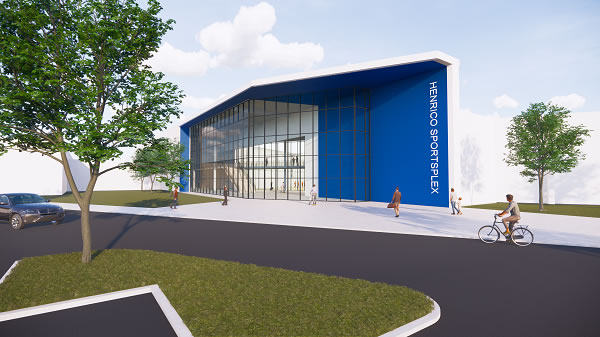 One of the developers behind the mixed-use conversion of Regency Square is teaming up with the region’s largest hotel operator on a comparable redevelopment of another struggling mall – in a public-private project that would be anchored by a sought-after arena for Henrico County.

The Rebkee Co. and Shamin Hotels are proposing Virginia Center Commons as the site for the county’s desired indoor sports and convocation center, as part of a larger redevelopment that would include a hotel, retail and entertainment uses, and potentially a residential component with some income-based housing.

Henrico supervisors endorsed the proposal Tuesday evening, authorizing county staff to enter into negotiations with Rebkee after fielding a second round of arena proposals that included two from other firms.

The board also set in motion several steps to be taken to pull off the public side of the project, including scheduling a public hearing for its next meeting Nov. 26 on a budget amendment that would allow the county to contribute up to $50 million toward securing the land and building the arena.

Rebkee is under contract to purchase the main mall building and the former Macy’s building, and is said to be finalizing a contract for the separately owned Sears building, to provide the controllable site that the county required from respondents to its latest request for proposals for the arena.

If the Sears building is secured, the total amount of property that would be under Rebkee’s control would stand at roughly 75 acres, about 25 of which would be filled by the arena. The project would not include the J.C. Penney or American Family Fitness buildings.

The county anticipates a project agreement to be drafted and presented to the board by the end of the first quarter of next year. The agreement would detail final building design, maximum price to the county, and operator agreement.

Having a controllable site to build the arena while also spurring Virginia Center’s revitalization put Rebkee’s proposal above others considered, said Neil Luther, Henrico’s rec and parks director who’s serving as the county’s point person on the project.

“That’s 70-plus acres right in the middle of an otherwise healthy corridor that has a tremendous upside for future economic growth,” Luther told BizSense. “The economic potential for this project becoming a catalyst for a larger, cascading redevelopment is huge. It hits every box we asked for in terms of location and accessibility.”

The mall conversion would be comparable to Rebkee’s redevelopment with Thalhimer Realty Partners of Regency Square, another struggling mall in Henrico whose revitalization has likewise involved the purchase of former Sears and Macy’s buildings – as well as the addition of an indoor sports component, with NOVA Aquatics’ planned $18 million facility there.

Acknowledging the similarities, as well as differences, between the two projects, Rebkee principal Rob Hargett told the board Tuesday: “We’re the only guys who really want to take on two malls. There’s nobody else crazy enough to do that.

“We’re seeing what the impacts of NOVA are going to have over at Regency. This is kind of along that same line,” he said, describing Virginia Center as a more challenging mixed-use project.

“This is a big lift,” he said. “It’s a little different than Regency Square.”

Specific uses and designs have yet to be determined, including whether the mall structures would be re-used or razed for new construction. Shamin principal Neil Amin said his firm is evaluating options for the hotel, and Dan Hargett – Rob’s brother and fellow Rebkee principal – said a development team would be assembled as plans progress.

Amin said his firm is buying the properties jointly with Rebkee, and then would develop the hotel specifically. Dan Hargett said Rebkee had been eyeing VCC for some time. He wouldn’t say when the two parcels were put under contract or whether those contracts were prompted by the arena RFP.

The properties would be purchased through three separate contracts with different ownership groups, as the main mall building is owned by New York-based Kohan Retail Investment Group, while the other buildings are owned by their respective retailers.

Kohan purchased the 577,000-square-foot mall structure in 2017 for $9 million. In the years since, Henrico has taken legal action against Kohan, claiming that the mall is violating the county’s fire and building codes and zoning ordinances.

A message left Tuesday for firm principal Mike Kohan was not returned.

Combined, the three buildings Rebkee is looking to purchase were valued in the county’s latest assessment in excess of $17 million.

The county had been in negotiations with Richmond Raceway to locate the arena there, but disagreement over land terms put an end to those talks earlier this year. County officials attributed the disagreement in part to the raceway’s parent company, International Speedway Corp., undergoing its recent merger with NASCAR Holdings Inc.

Other locations were pitched for the arena, including the county’s Belmont Golf Course, but none of the initial proposals considered included a controllable site, prompting the county to requested more-detailed proposals from three respondents: Rebkee, Eastern Sports Management LLC and MEB General Contractors.

Luther said Rebkee’s proposal outshone the rest in large part because of the mall’s location, in a developed area with available infrastructure and easy access to Interstate 295 and I-95, which runs alongside the property.

“There’s plenty of excess sewer capacity out that way, so that property is prime for redevelopment,” Luther said, adding that the site provides savings of as much as $8 million that would otherwise be needed for road improvements and utilities.

The facility would be designed to host basketball and volleyball games. (Henrico County)

Henrico is planning for a roughly 215,000-square-foot arena that can accommodate basketball, volleyball and other indoor sports, to capitalize on the county’s steady sports tourism numbers.

Last year, sports tourism accounted for $54 million in local economic impact, according to the county, which hosted more than 170 tournaments at its parks and sports complexes. The county’s on track to hit 180-plus tournaments this year.

The facility also would host high school graduations, currently held at VCU’s Siegel Center. Without a comparable indoor venue, the county projects that it’s missing out on $33 million in estimated annual spending from sports events specifically.

Luther said the facility’s $50 million budget, as well as its size at roughly 215,000 square feet, stems from initial projections the county put together two years ago. Talks about a convocation center in the county have been recurring for two decades. The arena would include expandable bleachers for high school convocations. (Henrico County)

“That number didn’t come out of a vacuum,” Luther said. “The county developed a prototype and we priced that out.”

The county is considering financing the project through lease revenue bonds that could go before supervisors early next year and would be issued through Henrico’s Economic Development Authority.

In his comments to the board, Rob Hargett said the arena would likely end up costing less than $50 million. Once that component is built, projected in late 2021, Hargett said it would help spur the rest of the project.

“It starts with an economic development bang right off the bat, right after we do the sports facility,” Hargett said.

ABOUT THE AUTHOR: JONATHAN SPIERS

Jonathan Spiers joined BizSense in early 2015 after a decade of reporting in Wilmington, N.C. Prior to that he was with the Henrico County Leader. The Virginia Tech graduate covers residential real estate, advertising/marketing, government and other news. Reach him at jonathan@richmondbizsense.com or (804) 308-2447.